I thought I’d break in the new kitchen by making a familiar dish to accompany Raj’s Friday night pizza. Since I haven’t cooked in months (due to living conditions), I wanted to make something that I occasionally crave–eggplant caponata. It’s best prepared a couple of days in advance because the flavor gets richer over time.

I bought the ingredients over the last two visits to two grocery stores, looking high and low for items that aren’t particularly exotic as you can see on the ingredient list. First on the list, the eggplants, well, as you can see, they are TINY and have very little meat. What’s strange about them is that they have already been hollowed out to remove the seeds. I wonder how this was done because the caps are still on each of them. I had Raj ask the nut and spice guy if the store had any pine nuts, but I don’t think he understood what we were asking for. Anyway, I found pine nuts  and currants in the rice aisle. Go figure. I also needed extra virgin olive oil and the Italian brands were three times the Jordanian produced one’s so we’ll see how Jordanian evoo  tastes as well.

Yesterday I set out to spend the afternoon in the kitchen, getting the feel of the stove top and oven. I diced the eggplant, fired up (operative word) the propane oven to 450 degrees (which smells like gas) and set my pan of diced eggplant in the oven to roast for 35 minutes. As I was prepping the next stage and with about 27 minutes left on the timer, the fire alarm in the hallway blasted off. Good god. Raj was at work, I didn’t know how to turn it off, and as I went racing to find the step-ladder, I was panicking about who I’d go to to get help. The neighbors? I don’t know them. The guard outside? I’m not supposed to talk to him (and he doesn’t speak English)…so I tried pressing the button on the alarm, but it didn’t shut off. I pulled on it and surprisingly the whole thing came out of the ceiling. Even out of the ceiling, I still couldn’t get the battery out because the ceiling plate was attached. I immediately turned on the vent above the stove, opened the window, and flipped on the switch for the fan (as you can see in the photo which does very little to circulate air). It was very stressful to say the least. 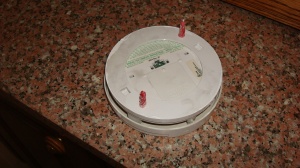 In the end, it still tastes good, but different. I suppose this is the Middle Eastern version of eggplant caponata.

Preheat the oven to 450 degrees. Cut off the stem and blossom ends from 1 eggplant. Stand the eggplant upright and cut down on 4 sides around the core to rid the eggplant of its seedy heart. Cut the 4 sections into 1-inch cubes. Repeat with the second eggplant.

In a large bowl, toss together the eggplant cubes, 1/2 cup of the olive oil, the salt, and the pepper. Turn the eggplant out onto a rimmed baking sheet and spread in a single layer. Bake for 30-35 minutes, or until browned, stirring once or twice if some pieces begin to burn. Remove from the oven and set aside.

In a large saute pan, heat the remaining 1/4 cup olive oil over medium high heat. When the oil is almost smoking, add the onion, garlic, pine nuts, currants, and red pepper flakes and cook, stirring frequently, for 4 to 5 minutes, or until the onion has softened and the pine nuts are toasted. Stir in the tomato sauce, thyme, and vinegar, mixing well. Add the eggplant, bring to a boil, reduce the heat to medium low, and simmer for about 5 minutes, or until the mixture has thickened. Remove from the heat and let cool to room temperature. The salad will keep, tightly covered, in the refrigerator for up to two days.

Serve the salad at room temperature.

[This can be made in advance. In fact, it tastes better the second day. I prefer it warm and served with focaccia or toasted slices of a baguette.]