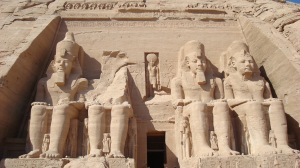 After four nights on the Nile cruise, we awoke early and boarded a short flight from Aswan to Abu Simbel for a quick tour of the two temples on site before boarding another flight back to Cairo. 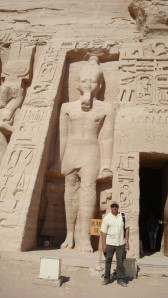 Abu Simbel: Built by Ramses II, Egypt’s longest ruling pharaoh, it’s one of the most recognizable images in the country. It’s actually two temples: the Great Temple of Ra-Harakhte, fronted by four colossal statues of Ramses II and the temple of Hathos, dedicated to Ramses’ favorite wife Queen Nefertari. They were both moved to their current location when the creation of Lake Nasser threatened their existence.

With two more days in Cairo before our departure back to Jordan, our last outing was an Islamic walking tour which included Sultan Hassan’s Mosque and a walk down the main street of the walled city of Cairo, one fortified gate to another, followed by last-minute shopping in the souk.

Sultan Hassan Mosque: The Mosque of Sultan Hassan, completed in 1363, is one of the finest in Egypt. In recesses around its open courtyard, each of the four school of Sunni Islam was taught to students, and in its mausoleum, Sultan Hassan’s sons are buried.

On the drive back to the hotel after a great day of walking and shopping, Raj eyed a shwarma stand on the side of the road and asked our driver to stop to get us some. I’ll admit, I was hungry, but I knew better! Despite my trepidation with ‘street food,’ I ignored my inner voice and fell prey to Raj’s urgings to ‘live a little.’ Of course I got sick the next day (our travel day) at both the airport and on our flight home…while Raj was just fine…I suppose I have to forgive though with ALL of the bargaining he did for me throughout our shopping excursions.

On the morning of our fourth day of our trip, we boarded an early flight from Cairo to Luxor to embark on our four-day Nile Cruise from Luxor to Aswan.

We boarded, checked in, quickly drank some tea and then set off for the Temple of Karnak. This temple was built over one thousand years by generations of Pharaohs. The great “Hypostyle Hall” is an incredible forest of giant pillars, covering an area larger than the whole of Notre Dame Cathedral. 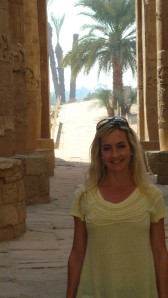 En route to the Valley of the Queens and Kings, we made a brief stop at the Colossi of Memnon, known in ancient Greek times for their haunting voices of dawn.

We stopped here very briefly and were assaulted by the throngs of vendors.

Valley of the Queens and Kings

In the Valley of the Queens, we were only able to enter one tomb, although we expected to see two. As a consolation, our guide ‘tipped’ the guard and we were able to take pictures inside (usually not allowed).

Temple of Hatshepsut: Rising out of the desert plain in a series of terraces, the Temple of Queen Hatshepsut (Ancient Egypt’s only female Pharaoh) merges with the sheer limestone cliffs that surround it. 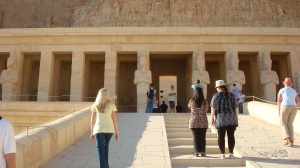 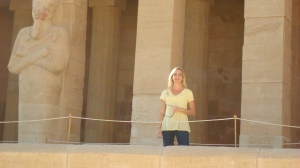 Unfortunately, there were no cameras allowed in the Valley of the Kings. This was my absolute highlight of the entire trip! We were able to enter King Tutankhamun’s tomb along with many others. It was a beautiful, peaceful, and serene location.

Temple of Denderah: This was the Ptolemaic Temple of the Goddess Hathor. This wonderfully preserved temple complex is a rare sight to behold, complete with a massive stone roof, dark chambers, underground passages and towering columns inscribed with hieroglyphs. The main temple of Hathor is almost intact. Hathor was the goddess of pleasure and love, usually represented as a cow, or a woman with a cow’s head. She was the beneficent deity of maternal and family love, of beauty and light; the Greeks associated her with Aphrodite.

Luxor Temple: The Temple of Luxor used to be linked up with the Temple of Karnak via the Boulevard of Sphinxes.

Temple of Edfu: The largest and most completely preserved Pharaonic, albeit Greek-built temple in Egypt, the Temple of Horus at Edfu.

Temple of Kom Ombo: This temple is dedicated to the crocodile-god Sobek. The temple stands at a bend in the Nile where in ancient times sacred crocodiles basked in the sun on the riverbank.

Temple of Philae: We boarded a ferry to the Island of Agilika to visit the majestic and romantic Temple of Philae (moved to this Island after it was flooded).

Felucca Ride: Lastly, we took a felucca ride, a typical Egyptian sailboat around Elephantine Island, Lord Kitchener’s Botanical Gardens, and the Agha Khan Mausoleum. The highpoint of this ride was watching the tiny boys paddle up to the boat to sing songs in search of money. The amazing thing is that they’re sitting on what looks like floating doors with wooden paddles in hand to propel them. It wasn’t particularly warm; it was a school day, and yet they were out in masses. Our guide told us that the boys guess the nationality of the boat and sing German, French, and English (and undoubtedly many more languages) songs in search of ‘tips.’ They thought we were a French group and serenaded us accordingly.

Lest we forget the Souk: Finally, we got to shop in the market. In part IV, I will reveal the purchases.

On the morning of day 5 on the Nile Cruise, we left the ship early to catch a flight to Abu Simbel…

Below are hundreds more pictures for your viewing pleasure. 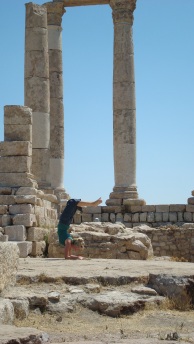