As the end of summer approaches (code speak for returning to work/school), Raj and I thought we’d make one last trip to visit family in Connecticut while setting off to accomplish something that we attempted five short years ago. You see, the last time we took this same trip, we stood in line at Sally’s for one and a half hours with no end in sight, grumpily standing in the hot, humid, unforgiving Connecticut afternoon. We got to the point where Raj broke and my dad and uncles weren’t much help either, regaling us in stories of gruff and unattractive servers, dirty bathrooms, and so-so pizza. We questioned whether the wait was worth it. I was ready to wait it out, but Raj raised the flag and we headed to Ernie’s, my dad’s favorite, which was fine, but left us with some unfinished business.

For those of you not in the know, Sally’s is one of the best pizza places in the country. It’s repeatedly in the top 10 lists year after year: http://www.usatoday.com/story/travel/destinations/2013/11/30/best-pizza-in-america/3785309/.  Sally’s (number 7 on the list) and Pepe’s (number 1) are both on Wooster Street in New Haven’s Little Italy. Pepe’s pizza is known for its ‘white clam pie’  while Sally’s for their ‘tomato pie.’ Sally’s was actually an offshoot of Pepe’s– nephews Salvatore (Sally) and Tony Consiglio, who worked for Pepe as teenagers, left in 1938 to open Sally’s.

We got to Sally’s strategically on a Sunday night at around 6pm. The line was about 20 deep, not too bad, not too good. We waited about 45 minutes until we were directed into a booth by the host who served as our waiter too. Sally’s is small and dark and not particularly nice (bring hand sanitizer). It probably looks the same today as it did 76 years ago, minus the upgrade sometime in the 1950’s when they added some spectacular lighting fixtures (I tried taking a picture of the fixtures, but my iPhone didn’t do the vintage glass justice). We sat below the aging picture of Frank Sinatra, appropriately crooked and covered in grime.

The service is legendary and lived up to its name. Sally’s is no frills and devoid of customer service, but that’s the appeal–it’s all about the pie. Nothing more. We ordered two pies:  tomato (tomato sauce, no cheese) and pepperoni. Both were excellent: the crust was perfect–thin and not too burnt, and the sauce was slightly sweet.

We walked away full and elated, down the block to the Italian bakery to finish off the night with a cannoli. Perfection! 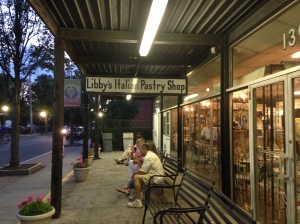 With Sally’s off the list, next time we will pay homage to Pepe’s, hopefully sooner than five years from now. 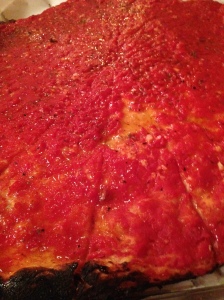