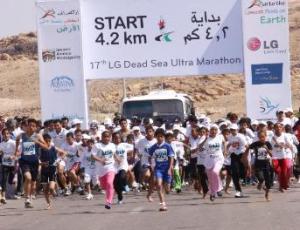 Running in Amman is a challenge. Prior to moving here, I ran outside almost everyday, along a beautifully maintained path that paralleled the Potomac River. Here, I can’t really run outside. Sure, I could run with a group that runs on Friday mornings, but then I’m not a social runner (it takes ALL of my concentration and focus just to run, so conversations are out of the question). For me, running in Amman is limited to running on a treadmill. It’s not that bad, but training on a treadmill is difficult, to say the least.

I ran a half marathon (only my second) last Friday down at the Dead Sea. Raj dropped me off at Sport City at 5:00 AM. I boarded a bus at 6:00, and the race began at 7:40. The organization of the race was fabulous, the route was beautiful, and the weather couldn’t have been better! Where else but Jordan will you be able to run alongside camels and donkeys or see goats and sheep across the road?

The plan was to meet Raj at the finish line and then go to one of the hotels to spend the day away floating in the Dead Sea, but that didn’t happen. I ended up telling Raj not to meet me, afraid that the hotels would be booked to capacity thus making my Dead Sea soak a bit too crowded. We’ll be making up for the lost soak in an upcoming weekend when it’s less crowded and when my muscles aren’t as exhausted as they were at the run’s completion. All in all it was a great run (even though the race results aren’t up yet), well worth the hours of monotonous training on the treadmill!

16 thoughts on “Running at the Lowest Place on Earth”